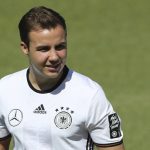 Reports are out claiming that unsettled Bayern Munich attacker Mario Gotze would prefer to join Arsenal over Liverpool this summer.

Last week Gotze ruled out a transfer stating that he wants to fight for his place at Bayern Munich.

However, BILD says he would still be open to a summer move away from the Allianz Arena should the right club make an offer.

They state that he turned down Liverpool and former club Borussia Dortmund as he thought they would be a step backwards after his time at Bayern.

Instead he is eyeing a switch to Real Madrid or Barcelona while Arsenal could also be a possibility.

Should Arsenal decide to make a move for the 23-year-old, he would team-up with international team-mates Mesut Ozil and Per Mertesacker at the Emirates Stadium.