It has been reported that Manchester United are reviving a bid for VfL Wolfsburg fullback Ricardo Rodriguez. 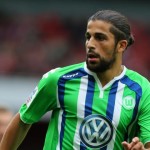 The Sun says United have sent scouts to watch the £20million-rated Switzerland star TWICE recently and he is high on manager Louis van Gaal’s wishlist.

Real Madrid are also interested in Rodriguez this month.

He has a £27million release clause but United will try to tempt Wolfsburg with a lower fee for the pony-tailed defender, who has been at the club for four years.

LVG is looking to strengthen his defence after a series of devastating injuries have threatened their chances of finishing in the top four.