Rickie Lambert has admitted that Southampton are a threat to Liverpool’s top four hopes. 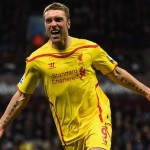 “I can’t say I saw the season they’ve had coming,” Lambert said.

“But when I look back now, not only myself but I think a lot of people under-estimated the characters in the dressing room who stayed there. That’s full credit to them for proving everyone wrong.

“They’ve done it year in, year out there and now they’ve taken it to another level. Ronald Koeman looks like a good manager and the new signings have come in and hit the ground running. The journey that club has been on has been amazing.

“The fact they’re still up there at this stage means without a doubt they are genuine top four contenders. Nothing seems to be fazing them.

“Even when they aren’t playing so well they grind out results. Defensively, they are very solid. Their new attacking players have come in and done really well. It’s going to be a hard game for us.”