River Plate defender Eder Alvarez Balanta has revealed that friends are now nagging him about his move to Barcelona. 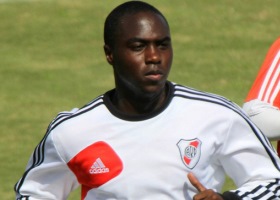 The 20 year old versatile defender is a favourite of Barca coach Tata Martino and expected to sign for the Nou Camp giants in January.

“My friends write to me on Facebook from Colombia and say: ‘Is it true that you’re going to Barca?’ And I say no, they have not told me anything, they are rumors.

“And they tell me: ‘But are you saying you could go?’. And I tell them no and they say ‘yes’. And I do not know what to say!

“They ask if the stories are true, I say it’s not true and they keep telling me it is, it becomes very difficult.

“So the rumours and everything that is being said is difficult.”