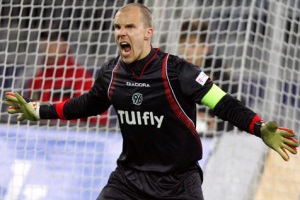 Hanover goalkeeper Robert Enke will return to action on Saturday against Cologne after an infection ruled him out for nine weeks and forced him to miss Germany’s final three World Cup qualifiers.

Hanover coach Andreas Bergmann told reporters that Enke is in good condition and has proven his old strengths in training already.

Enke was a frontrunner for Germany’s first choice spot prior to his illness but now has seen Rene Adler, Tim Wiese and Manuel Neuer gain the upper hand.

Germany coach Joachim Loew has ruled out Enke starting in their upcoming friendly matches, with Wiese and Neuer earmarked already for the Chile and Ivory Coast encounters in November.

Loew, however, has still not decided on his first choice for next year’s World Cup in South Africa.