Roberto Mancini Charged With Improper Conduct By The FA 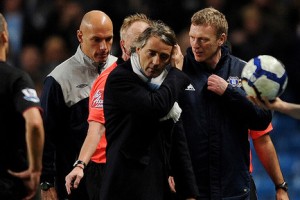 Manchester City manager Roberto Mancini has been charged with improper conduct by the FA after his clash with Everton counterpart David Moyes on Wednesday.

The Italian took exception to Moyes picking up the ball in injury time of City’s 2-0 defeat, an action Mancini interpreted as time-wasting, and the pair had to be separated by fourth official Howard Webb before Peter Walton’s intervention.

Both were sent to the dressing rooms and, having considered Walton’s report, the FA have decided to charge Mancini. He has until April 6 to repond.

The FA have written to Moyes, who exchanged words with Mancini, “to remind him of his responsibilities but will not be taking formal disciplinary action”.

The Everton manager played down the incident on Friday.

“It was nothing really, and I’ve no problem with Roberto,” said Moyes.

“He was fine immediately afterwards, he apologised walking down the tunnel, and I have no problem at all with him, you just get along with it.”