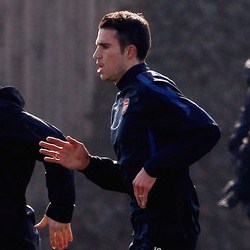 Robin van Persie has denied questioning the professionalism of players in the Barclays Premier League.

The Arsenal striker was quoted as saying that some unnamed “English colleagues” enjoyed the party lifestyle too much, and that their careers were being shortened because of it.

The 27-year-old Dutch international, however, denied making the comments via his Twitter page, and said: “Want to clear up some things. I supposed to have made comments about the lifestyle of english players. Words have been taken out of context. Only thing I meant to say is if u look after urself u can enjoy a longer career. Never mentioned english players in particular.”

He added: “Who am I to judge. Think the prem league is amazing and so are the boys playing in it!!”

It is the second time in a week that the former Feyenoord star has moved to deny quotes attributed to him.

Last week he released a statement to rubbish claims in the Dutch media the he had criticised the gamesmanship of players from other clubs such as Chelsea and Barcelona.

“These reports falsely suggest that I recently made negative comments about Spanish and Chelsea players, I would like to make it perfectly clear that I haven’t done an interview with Sport 1 or any other outlet in recent weeks and I’ve certainly not been rude as the comments suggest,” he said in a statement.

“I respect my colleagues of Spain and Chelsea and look forward to playing against them for many years to come.