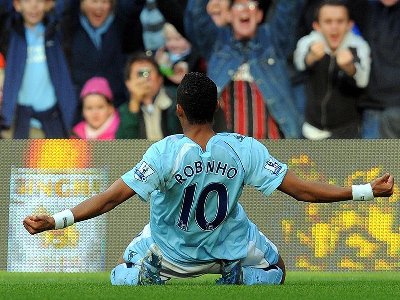 Brazil international forward Robinho believes that Manchester City can break into the Premier League’s top-four this season with all the new signings that the club has made..

It has ben widely reported that City boss Mark Hughes has snapped up Carlos Tevez, Emmanuel Adebayor, Roque Santa Cruz and Gareth Barry this summer as well as making bids for a host of other players, including Chelsea and England captain John Terry.

Robinho also revealed that he is very excited by the recent transfer activity at Eastlands. He told local reporters that there is no longer a top-four as Manchester City has made it a top-five. He also added that from this season, City must have to go in with the mindset that it is one of the very best clubs in the Premier League.

Robinho also expressed his satisfaction with the signing of striker Carlos Tevez. He said that Tevez is a world-class player and it would be fantastic to play alongside him.

The striker also said that he has always urged the club to sign players like Tevez and Kaka when there’s been a chance, but he also know that the club must also build the defence..

He added that the club can have the best attacking six players in the world, but unless the defence compliments it, then the club won’t win anything.

Robinho also finished by saying that ff the players the club have signed and the players it may sign all work well together then, the club can become unbeatable and not just in England, but in Europe as well.


Chelsea Will Not Lodge Official Complaint Against Manchester City,Yet