Robinho Happy To Be Linked With Barcelona 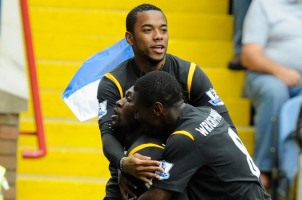 Robinho revealed in a radio interview that he was flattered by talk of a move to Barcelona.

Robinho said that he is very happy for the interest that Barcelona has in him because by playing in the Nou Camp it is much easier to be the best player in the world than to do so with Manchester City.

However, Robinho said that he is not forcing a hypothetical departure from England and that he has got no problems with manager Mark Hughes.