Robinho Reveals He “Always Wanted To Play For Barcelona” 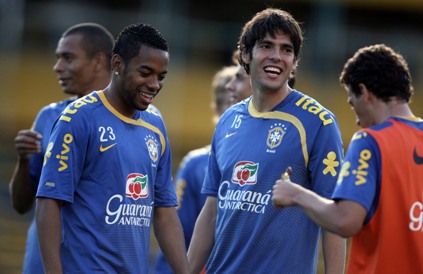 Manchester City star winger Robinho has revealed that he has “always wanted to play for Barcelona”, amid speculation the Spanish giants are keen on securing his services.

Rumours surfaced at the weekend that the European champions will make a bid for the Brazilian ace once the transfer window reopens in the New Year, with French striker Thierry Henry lined up as a deal sweetener.

Manchester City however made it clear that their £32.5m signing was not for sale this summer, but Robinho’s comments have cast doubt on his future at Eastlands and has given Barcelona encouragement in their pursuit of him.

Robinho told a local newspaper that it is not easy to say no to a club like Barcelona as they are the current champions of Europe, and it is a nice city and that he likes Spain very much.

Manchester City signed Robinho from under the noses of Premier League rivals Chelsea in a British record transfer fee last year and despite moments of magic during his first season in English football, including a hat-trick against Stoke City, the 25-year-old’s form was patchy and at times his attitude was called into question.

This season, he is competing with Carlos Tevez, Emmanuel Adebayor, Craig Bellamy and Roque Santa Cruz for a place in Mark Hughes’s first XI and has featured in two of City’s three Premier League games. He is yet to open his goal account.