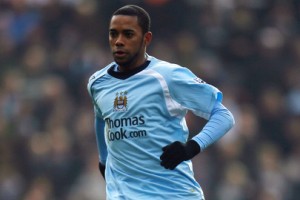 Sensational transfer news are out and it has been reported that Brazilian international winger Robinho will ask for a January move away from Manchester City if he fails to get a regular place back in Mark Hughes’ first team.

Given the form of Craig Bellamy, there is every chance it will be a struggle for the forward to regain his spot.

Robinho, now age 25, will demand a switch to Barcelona as he cannot afford to jeopardise his place in the Brazil team ahead of next year’s World Cup in South Africa.

It is now believed that the player’s representatives are already pushing for the move to the Catalan giants and Champions League holders.

It is also believed that Barcelona are ready to match the £32.5million Manchester City paid Real Madrid for him last year in a British transfer record.

At the moment, Robinho is out with a stress fracture to his ankle sustained during a match in August.

In that time, Bellamy has stepped up to the plate and has been in sensational form, playing as an attacking left winger or second striker.

Robinho returns from injury in a week but faces a huge battle to regain his position.

The Brazilian has so far started the first three games of the season but was substituted in each one.

In his first campaign with the club, he scored 14 league goals – 11 at home.

Robinho often went missing in physical games and his displays away from home left a lot to be desired.


Samir Nasri Ready To Return To Action For Arsenal