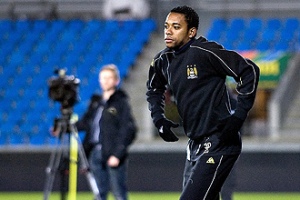 Manchester City have finally revealed that Brazilian international forward Robinho will leave the club once the transfer window reopens in January.

Manchester City manager Mark Hughes has insisted that the speedy forward is going nowhere and that rumours linking him with a move to Barcelona are nothing but “people making mischief”.

However, it is believed that behind the scenes Hughes is resigned to losing the former Real Madrid star, who has told his advisors that he does not want “another day in Manchester”.

Robinho has failed to settle in the city, a situation not helped by the summer departures of fellow Brazilians Jo and Elano, the infamous dreary weather and a reluctance to learn the language.

City paid £32.5 million for him 14 months ago and will want to recoup as much as possible now, with Barcelona expected to stump up in the region of £30m to take Robinho back to Spain.

Lionel Messi Convinced Barcelona Back To Their Best