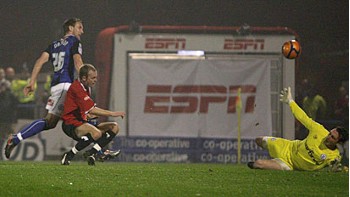 FC United of Manchester pulled off a major shock in the FA Cup with a controversial 94th minute goal to beat Rochdale 3-2 in a thrilling first round tie.

The non-league side, set up in protest against Malcolm Glazer’s takeover of Manchester United, looked to be heading towards a replay after they threw away a two-goal lead at Rochdale.

But a calamitous late error from ‘keeper Josh Lillis, which allowed striker Michael Norton to pounce, means that FC United are now just one game away from a potential clash against the Red Devils in the third round.