Roma Defender Cicinho Reveals He Is Happy At Europe 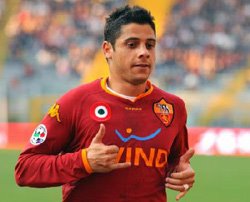 Roma right-back Cicinho has denied speculation that he is seeking a return to Brazil and insists his wish is to remain in the Italian capital and that he is very happy at AS Roma.

Cicinho, who is a reported target of Spanish champions FC Barcelona, is under contract with the Eternal City giants for a further three seasons.

However reports in the Brazilian media claimed the 29-year-old defender’s priority was to move back to South America but Cicinho rubbished that claim and said that he have never stated to anyone, not even to Roma, any wish to return to Brazil.

He went on to say that he is very happy at Roma and is delighted at how his career is going. He also added that he has been in Europe for five years and he has no problems whatsoever.

The defender ended by saying that at this time his focus is on returning to play with the Roma jersey.