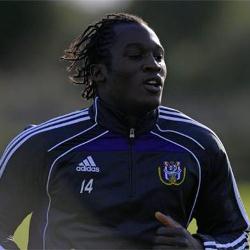 Romelu Lukaku is desperate to conclude his £20 million move to Chelsea on Saturday at a meeting between the two clubs in Monaco.

Lukaku, whose physical power has drawn multiple comparisons to Didier Drogba, has made it clear that he only wants to join the Blues.

It is said that Lukaku’s agent Christophe Henrotay is set to open discussions with Anderlecht’s general manager, Herman van Holsbeeck and a host of Chelsea representatives as the two sides seek to complete the transfer.

The 18 year old Belgium international appeared recently at a PR event, according to the Daily Mail, where he filled out a Q&A form for a young fan writing that it was his ‘dream’ to play for the West London club.

Later, Lukaku also signed a football for another youngster who was wearing a Chelsea top, and said: “I like your shirt.”

The hints may be somewhat subtle, but they appear to be sufficient for the Blues to launch a bid.

Drogba, who is reportedly Lukaku’s idol, could very well assist the club in luring the teenage sensation to Stamford Bridge this summer, considering the Ivory Coast international may not be around in London for much longer.