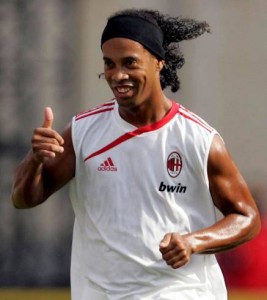 AC Milan’s Brazilian midfielder Ronaldinho has denied speculations that he is considering retiring from football at the end of the season.

The Brazilian superstar, now age 29, has not featured in AC Milan’s last two games and has yet to score after three Serie A appearances this season.

However Ronaldinho said that he had never considered the possibility of retiring from football and added that the source of his happiness has always been to play football.

The talented midfielder also added that he is very happy at AC Milan and will remain with the club until the end of his contract.

The two-time FIFA World Player of the Year winner joined AC Milan from Barcelona last year but has failed to make an impact at the San Siro.

Rossoneri coach Leonardo did not even include him in the 2-1 Champions League victory at Marseille last week and the South American failed to feature in the narrow triumph over Bologna at the weekend.

Ronaldinho is under contract at AC Milan until June 2011.