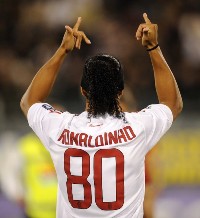 AC Milan’s Brazilian playmaker Ronaldinho has revealed that he is targeting glory in the Champions League next season.

It is said that the Brazilian midfielder will be given added responsibility next season due to Kaka’s departure for Real Madrid and Rossoneri president Silvio Berlusconi is expecting the playerto make the step up this term after failing to burst onto the scene following his arrival from Barcelona last year.

It is believed that Ronaldinho is now ready to fire his side to European glory, though he states he feels no pressure on his shoulders.

Ronaldinho recently told reporters that the club’s objectives get bigger, a bit like Milan. He also said that the club wanted to qualify for the Champions League last year, and now they want to win it.

Ronaldinho also said that he started well last year but then I got injured and in addition, Carlo Ancelotti rarely used him. The player aded that this time he wants to play his best from the very first game.

Some critics claimed the midfielder was unable to play alongside Kaka in the team last season. With the Brazilian moving to Real Madrid, Ronaldinho knows there is plenty for him to prove.

Ronaldinho also said that he feel more important now and that he can feel the trust of my team-mates, the club and the fans. He added that tesponsibility is something that he likes and he is not worried at all.


Man Utd To Play a Second Match Against Malaysia