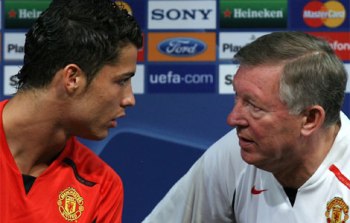 Manchester United boss Sir Alex Ferguson said that he believes Cristiano Ronaldo could once again play for the Red Devils one day.

Ferguson told reporters in Kuala Lumpur where the team are on a pre-season Asian tour that Ronaldo might come back again. He added that sometimes it happens that way. He also said that Ronaldo loved Manchester United and if you look back at the six years he had with United, he never missed training.

Ronaldo became the world’s most expensive player when he made the switch to Spanish giants Real Madrid on a six-year deal worth around 94 million euros (81 million pounds).

Still just 24, Ferguson said that Ronaldo’s best was yet to come, describing him as the top player in the world by a long shot.

Sir Alex also said that Ronaldo could have gone to Real Madrid, Barcelona or any other clubs but he came to the right one and appreciates that and that it was always his intention to make his move.

Sir Alex also added that there’s no doubt Ronaldo is a huge loss to United and he believes that it is a challenge for the club. He also added that it won’t be the same without Ronaldo, and it can’t be.

Ferguson also added that Ronaldo is the best player in this world by absolutely miles, streets and definitely ahead of Lionel Messi, and Kaka.

Madrid courted Ronaldo all through last summer but he decided to stay and try to help United defend their 2008 Champions League title, featuring in their final loss in May to Barcelona.

Although United retained their English Premier League title, Ronaldo has said he made up his mind to leave in May 2007.


Sir Alex Says Carlos Tevez Is Not Worth £25million