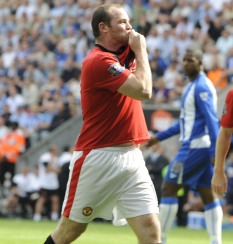 Striker Wayne Rooney has promised Manchester United fans that he will never desert the club like Cristiano Ronaldo.

Rooney, now age 23, has been United’s main man since Ronaldo joined Real Madrid and the striker is doing extremely well, with five goals in as many games and Rooney insists that there will be plenty more to come as he plans to spend the rest of his career in a Red Devils shirt.

Rooney declared that he has always said that he loves the club and, as long as he is wanted here, he will continue to play at Old Trafford.

Rooney also said that he has everything he wants as his family is just 30 minutes away. He also added that he is settled and honestly can’t see himself going anywhere else unless he is told otherwise by the manager.

Rooney has so far hit 102 goals for United since boss Alex Ferguson snapped him up from Everton on transfer deadline day in August 2004 yet according to team-mate and fellow striker Dimitar Berbatov, Rooney will not hit his peak for another five years.

Berbatov said that when Rooney reaches around the age of 28, he will become even better.