Rosicky Set To Return For Arsenal After 20 Months Layoff 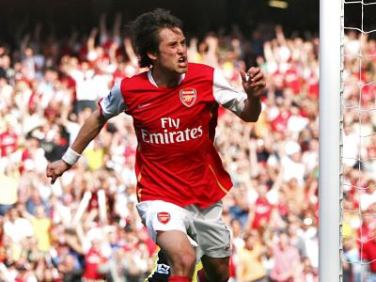 Arsenal winger Tomas Rosicky made his first competitive appearance after 20 months on the sidelines when he played for Czech Republic on Wednesday’s World Cup qualifier against minnows San Marino.

The 28-year-old midfielder, who has scored 19 goals in 68 games on the international stage, has been out of action due to injury since January 2008 and has not played for Arsenal in the Premier League since then.

Czech national team coach Ivan Hasek called up Rosicky to give a boost to a team that is struggling in fifth spot in Group Three, seven points behind leaders Slovakia.

Hasek told reporters on Tuesday that he is convinced that Rosicky will be all right and i has been five weeks since his last muscle injury and that there is no risk.

Hasek also said that he had spoken to Arsene Wenger and said that it is possible that Tomas will play against Manchester City on Saturday.

Rosicky last played for the Czech team in November 2007, when his side beat Slovakia 3-1 in Prague on the way to Euro 2008.