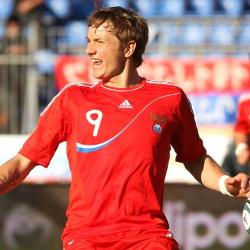 Roman Pavlyuchenko struck a hat-trick to give Russia a 3-1 comeback win over Armenia on Saturday, keeping them in the hunt for a Euro 2012 qualifying place from a tight Group B.

Russia, who went into the game level on points with Ireland and Slovakia, fell behind when Brazilian-born Marcos Pizzelli scored against the run of play in the 25th minute.

Pizzelli, who received Armenian citizenship in 2008, caught the Russian defence asleep and slid the ball into an open goal after going one-on-one with keeper Igor Akinfeyev.

The Tottenham Hotspur striker, who last month publicly criticised Russia coach Dick Advocaat for often selecting his favourite players, made it 2-1 just before the hour after a quick passing exchange between captain Andrei Arshavin and Igor Semshov on the left wing.

Pavlyuchenko, who was included in the starting line-up on Saturday after leading scorer Alexander Kerzhakov suffered a knee injury, sealed the points with a 73rd-minute penalty after Yuri Zhirkov was fouled by Sargis Hovsepyan.