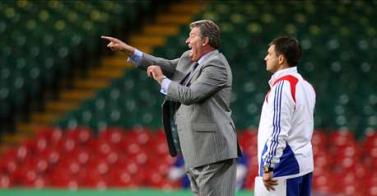 Russia ended Wales’s slim hopes of qualifying for next summer’s World Cup finals with a 3-1 win at the Millennium Stadium in Cardiff.

They were always unlikely to figure in the qualification shake-up following dropped points early on in their campaign, but this defeat sees them mathematically certain not to be in South Africa in 2010.

The scoreline was a little harsh on Wales, who created a string of chances for themselves but they were unable to finish more than James Collins’s 54th minute strike.

Russia did more than enough in the end and goals from Igor Semshov and Sergei Ignashevich created the platform for Spurs striker Roman Pavlyuchenko to finish the job in injury time.


Terry Accuses Klasnic For Spitting At Him