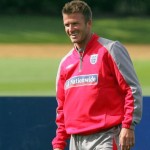 Michel Salgado is believed to be ready to make a cheeky attempt to lure world soccer superstar David Beckham to join him at Blackburn.

The pair forged a close friendship during their time at Real Madrid and have stayed in touch since leaving the Bernabeu.

LA Galaxy star, David Beckham is known to want a return to Europe in January to cement his place in the England World Cup squad.

Spaniard Salgado, now age 33, told reporters that he and Beckham are still friends and that Beckham had asked him about Blackburn Rovers.

Salgado added that he will try to speak to David Beckham and bring him over to Blackburn.

However the defender jokingly said that he will have to collect money from the players to pay his wages.