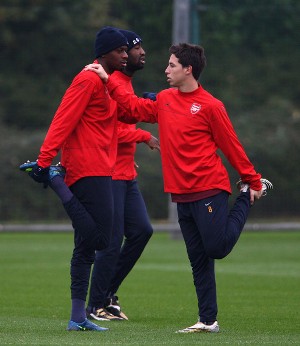 Arsenal midfielder Samir Nasri has had an unfortunate accident during training and ended up breaking his leg. The player now will miss the start of the Premier League season.

It has been reported that the France international fractured his fibula during the Gunners’ pre-season camp in Austria and club medics expect the 22-year-old to be out for between two and three months.

This unfortunate event will also cause him to miss France’s World Cup qualifiers against Faroe Islands in August and September’s clashes with Romania and Group Seven leaders Serbia.

The injury blow is not as harsh as it could have been for Wenger as another left winger, Czech Tomas Rosicky, returned to action for the first time in 18 months in Saturday’s pre-season friendly at Barnet.

Wenger is yet to boost the attacking contingent of his squad this summer, despite the recent sale of striker Emmanuel Adebayor to Manchester City. So far, Belgian centre-back Thomas Vermaelen is the only major addition to the Gunners’ squad during the transfer window.

I strongly believe that Arsene Wenger might try to bring in a new face to the Emirates as cover for Samir Nasri.


Glen Johnson Aims To Make An Impact With Liverpool