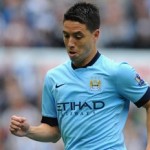 It has been reported that Manchester City midfielder Samir Nasri has reaffirmed his international retirement.

The former Arsenal midfielder announced last week he was unavailable for France selection.

“I feel things were just too complicated with Les Bleus, especially with Didier Deschamps,” said Nasri over the weekend.

“But I respect his choices.

“I don’t enjoy seeing Team France struggle. I am not interested in controversy.”