Samir Nasri Set To Return Against Liverpool In The Carling Cup 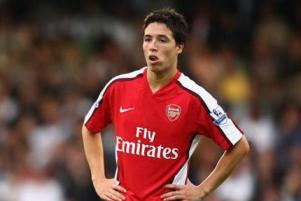 Great news for all Arsenal fans as midfielder Samir Nasri is set to return to action in the Carling Cup against Liverpool tonight.

The French international midfielder sustained a broken leg during a pre-season training, keeping him out of all Arsenal matches so far this season.

However the midfielder has revealed that he is ready for action after completing three months of rehab.

Nasri told reporter that he feels good and happy to be back on the pitch.

The 25 year old midfielder also said that it has been difficult but he was always looking for a speedy recovery.

The player added that he knew it would be hard but everyone was behind him and helping him through the ordeal.

He also said that he needs to play as nothing can replace the games and therefore he worked well with fitness coach Tony Colbert and now after one or two games he is ready to come back to the first team.

Arsenal boss Arsene Wenger admitted he would give Nasri a chance in an otherwise young Gunners squad to take on the Reds.