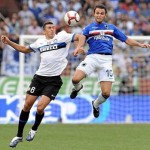 Giampaolo Pazzini scored the only goal as Sampdoria beat champions Inter Milan to return to the top of the Serie A table on Saturday.

Sampdoria had lost the league lead on Wednesday when they were well beaten 2-0 at Fiorentina, allowing Inter to take over at the summit following four successive victories.

But in inflicting the first defeat of the season on Jose Mourinho’s Inter, Sampdoria emphatically cemented their own title credentials, even though they could lose the lead again if Juventus beat Bologna on Sunday.