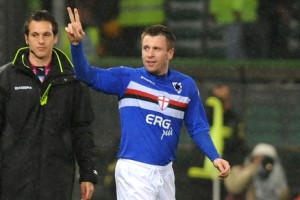 Sampdoria climbed to fifth in Serie A after a narrow win over struggling Juventus in Genoa.

Antonio Cassano scored the only goal of the game in the 77th minute, a breathtaking shot from 32 yards out which stunned Juventus goalkeeper Antonio Chimenti, to hand the Blucerchiati three valuable points.

Cassano spotted the Juve keeper off his line and got what proved to be the match-winner on target.

The Samp hero celebrated briefly before asking to come off with a suspected thigh injury.

The result has lifted Samp level on 47 points with Palermo, who hold the last Champions League qualifying spot.