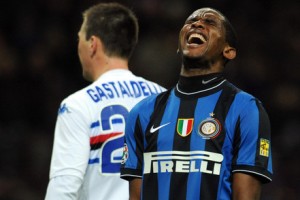 Inter Milan striker Samuel Eto’o has had his magical week wrecked after his Bentley was stolen.

Eto’o, the matchwinner at Champions League opponents Chelsea this week, lent the €150,000 vehicle to Marko Arnautovic, the Austria international who is currently on loan at Inter from FC Twente.

It has been reported that Arnautovic contacted the authorities after the Bentley went missing from the Sheraton Hotel in Milan’s Porta Venezia quarter.