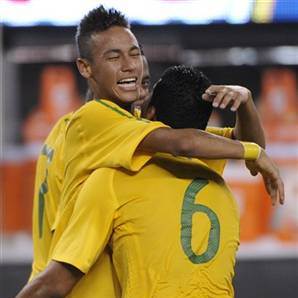 Santos president Luis Alvaro de Oliveira Ribeiro has issued a warning that he intends to complain to FIFA as Chelsea continue to show interest in starlet Neymar.

Premier League champions Chelsea have already seen a bid of £20 million rejected for Neymar, 18, but the player is apparently keen on a move to Stamford Bridge and reports have claimed personal terms have already been agreed.

It is believed that Neymar has a R$ 80 million (£28.75 million) release clause in his contract and Santos would not be able to stand in his way should the Blues meet it, but their president feels they may be guilty of tapping up the player.

“The club had sent us a formal transfer proposal, which was rejected immediately, but the harassment continues,” he told a press conference. “Considering the ethics which clubs are supposed to adhere to, this is completely intolerable, and Santos will go to defend its interests in FIFA.

“Yesterday [Wednesday], there was a telephone enquiry. [Chelsea] got in contact with my secretary and asked for our fax number. This does not mean that they have opened negotiations. Santos are not interested in selling Neymar for any amount of money.

“The contract between player and club contains a clause, that is a compensation payment in the case that either party wants to break the agreement. If they meet the terms of that clause there is nothing we can do.”