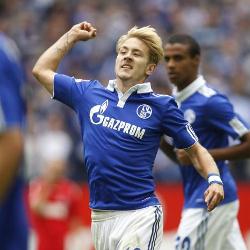 Dutchman Klaas Jan Huntelaar hit a hat-trick as Schalke 04 came from behind to demolish hapless Cologne 5-1.

Schalke’s goal spree began with what looked to be an extremely harsh penalty awarded for handball.

It was converted by Huntelaar three minutes before halftime to wipe out Lukas Podolski’s early strike for Cologne.

Huntelaar and Lewis Holtby scored twice in as many minutes shortly after the restart, both goals set up by Marco Hoeger, and former Real Madrid and Spain forward Raul fired the fourth just before the hour.

Huntelaar completed his hat-trick six minutes from time as Schalke bounced back from last week’s 3-0 defeat at VfB Stuttgart.