Reports are out claiming that Schalke remain hopeful of taking Kevin de Bruyne off Chelsea’s hands this month. 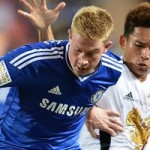 The German side are in the market for a new wing signing and have De Bruyne on their radar after his success last season on-loan at Werder Bremen, says Sport.

However, De Bruyne’s form in preseason with Chelsea may have been enough to convince manager Jose Mourinho to include him in his Premier League squad for the new campaign.