Sergio Aguero Insists He Is Happy At Atletico Madrid 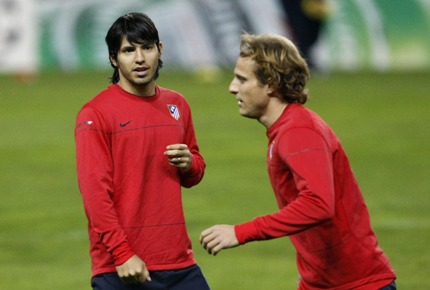 Argentina international striker Sergio Aguero who has been a target of Premier League giants Cheslea FC has revealed that he is happy at his current club Atletico Madrid.

The son-in-law of Argentina’s legendary striker Diego Maradona has been linked with a £50million switch to the Blues this summer but any move for the player is highly unlikely after he played in last night’s 3-2 Champions League win over Panathinaikos and this means that Aguero would be cup-tied for Chelsea’s European campaign this season.

Aguero, who has also been targeted by Manchester United, told reporters that he have always said that he wanted to stay at Atletico and it has happened.

He also said that he is pleased with his goal but more pleased with the team’s victory. He added that the team played well although they relaxed a little at 3-1 up.