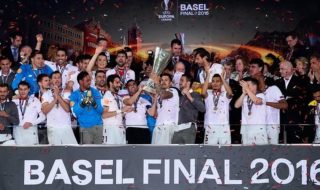 Liverpool suffered a dramatic second-half collapse as Sevilla claimed the Europa League for the third season in succession with a superb comeback.

Jurgen Klopp’s side looked on course to secure the prize of Champions League football – on offer to the winners of the competition – when Daniel Sturridge’s magnificent strike with the outside of his left foot gave them the interval lead.

The good work was wrecked in the first 17 seconds of the second half when Kevin Gameiro turned in Mariano Ferreira’s cross to put Sevilla level.

Coke’s fine 64th-minute finish confirmed Sevilla’s superiority and he added a contentious third from close range, which was initially disallowed but was then given as Liverpool slumped to their second final defeat this season after losing to Manchester City in the Capital One Cup.