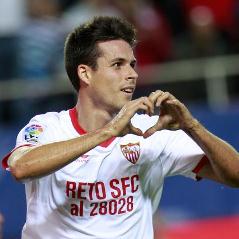 An injury-time goal earned Sevilla a last-gasp 2-2 draw against Racing Santander at the Ramon Sanchez Pizjuan.

Racing had been on course to record their first Primera Division win of the season after Ariel Nahuelpan cancelled out Manu’s first-half opener in the 63rd minute and Jairo added a second six minutes later.

However, Manu levelled the scores in injury time to earn Sevilla a draw and keep Racing in the relegation zone.