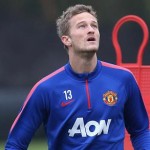 Reports are out claiming that Sevilla are eyeing Manchester United goalkeeper Anders Lindegaard.

El Gol Digital reported that the Dane is now on Sevilla’s shopping list.

Lindegaard hasn’t played a single game this season and is keen on a move away to seal first-team football.

The Dane joined United in 2011 from Norwegian side Aalesund and looked set to challenge David De Gea to be United’s No1 two seasons ago before the Spaniard’s rapid rise in form.

Marek Hamsik : I Want To Stay With Napoli