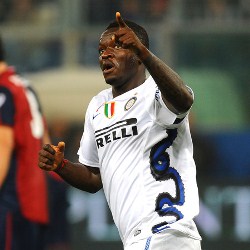 The 26 year old Ghana international has talked up the prospect of moving to Spain this summer.

Muntari was sent to Sunderland on loan in January but the Premier League club baulked at the €9m price-tag for the defensive midfielder.

Inter do not want Muntari back either, so he is set to be either loaned again or sold off elsewhere.