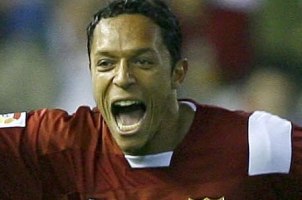 Bad news for all Sevilla fans as it has been hit by the news that Adriano will be sidelined for at least a month with a thigh injury.

Adriano was taken off in the 36th minute of the Champions League victory in Stuttgart on Tuesday and tests have revealed the 24-year-old winger has torn a muscle in his thigh.

A club statement confirmed that the length of the player’s layoff will be at least four weeks, always dependant on the development of the injury but the intention is to shorten as much as possible his recovery period.

Adriano will now miss the Primera Division games against Espanyol, Xerez, Villarreal and Tenerife as well as the Copa del Rey tie at Ciudad de Murcia and Stuttgart’s visit to the Ramon Sanchez Pizjuan.