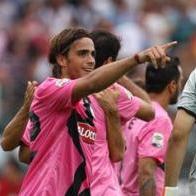 Juventus returned to the top of Serie A after battling to a 1-0 win at Siena.

Alessandro Matri scored the decisive goal nine minutes into the second half after a skilled assist from strike partner Mirko Vucinic, picked at the expense of Alessandro Del Piero.

Though the home side were competitive and disciplined up until the goal, Juve were able to coast to their second consecutive win after breaking the deadlock in a game devoid of much in the way of excitement.

Roberto Vitiello headed a free-kick onto the crossbar on 69 minutes, though the offside flag was already up, as the Robur are left waiting for their first win since returning to Serie A.

The contest was a far cry from the one-sided slaughter the previous weekend, when Juve christened their new stadium with a 4-1 hammering of Parma.