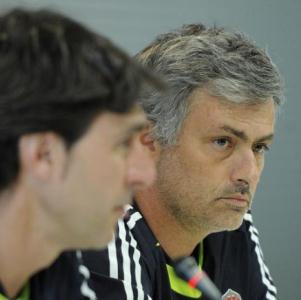 Real Madrid coach Jose Mourinho’s decision not to speak to the media ahead of the ‘Clasico’ with Barcelona resulted in a walk-out by scores of journalists at the start of the pre-match press conference, which was held by assistant coach Aitor Karanka.

It was revealed earlier on Friday that Karanka, as has happened on occasions this season, would speak to the media in place of Mourinho prior to the table-topping clash between the two Spanish superpowers at the Bernabeu.

When Karanka did come out he was accompanied by Mourinho, but as soon as it was confirmed the Portuguese would not be answering any questions, it was estimated that more than 100 journalists and television crews from several different countries left the room.

Karanka then fielded questions from the journalists who stayed, but Mourinho remained silent.

Filippo Ricci, a journalist with Italian newspaper Gazzetta dello Sport who was among those who left, explained: “What happened was Mourinho decided not to come to the press conference, the usual press conference before the Clasico, and to send out Aitor Karanka.

“The press didn’t like this decision and decided to quit the press centre as he was coming in.