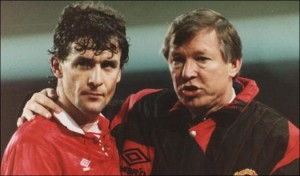 Sir Alex Ferguson hit out at his local rivals after their 100% start to the season and warned opposite number Mark Hughes that he must win the Premier League title to justify his £200 million spending spree.

Sir Alex told a local radio station that the rivalry between the clubs has gone up a notch in the last few months, with Manchester City signing new players and coming up with a posters about Carlos Tevez and said that City have been a bit cocky.

However Sir Alex revealed that he is keen to win his fourth consecutive title, but believes that Manchester City will have to overtake his side to the post if they are to justify such a large investment.

Sir Alex added that when a club spend that amount of money, and the wages they are paying, the team must win the league with such investment and that ui where the difficulty will come for them.

He also added that it is going to be very difficult for Manchester City to win the league because there is Manchester United, Liverpool, Chelsea and Arsenal and City will have to beat the big four to get the league title.