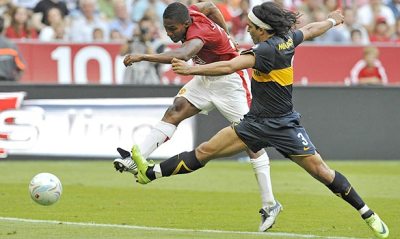 Manchester United manager Sir Alex Ferguson has hailed the impact Antonio Valencia has made at Old Trafford after the new signing set up both goals in Wednesday night’s 2-0 win over Spanish club Valencia.

Valencia has been Ferguson’s most expensive recruit during a relatively quiet summer at £17million.

Sir Alex told reporters that it was a very exciting performance and that it was a real winger’s effort by Valencia. He also added that Valencia showed great speed, power and balance and after coming to United, he has immediately taken on the challenge and everyone is pleased with what he has done so far.

Valencia provided the right-wing cross that Wayne Rooney headed home seven minutes after the interval to put United in the lead.

Later from a similar position, Valencia presented 19-year-old Tom Cleverley with the chance to show Ferguson what he can do with a neat finish late on to end the Primera Division outfit’s hopes of snatching something from an entertaining encounter.