Sir Alex Predicts Ben Foster To Be England No.1 For The World Cup 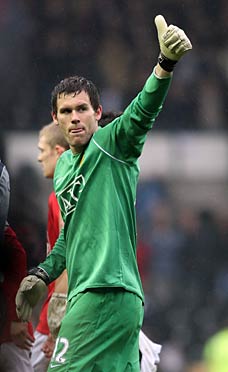 Manchester United manager Sir Alex Ferguson is 100% certain that Ben Foster will be England’s World Cup keeper in South Africa next summer even though Foster has only played once for his country under Fabio Capello, coming on as a half-time substitute in the March friendly against Slovakia.

The Manchester United keeper would almost certainly have added another couple of caps to his tally last month, only for a thumb operation to prevent him facing Kazakhstan and Andorra as replacement for David James, who had undergone shoulder surgery.

It is a depressingly familiar story for Foster, who spent his first two years as a United player on loan at Watford and had his third wrecked by a cruciate injury. Yet despite the catalogue of injury, Ferguson has never lost faith in the former Stoke man.

He has said often enough in the past that Foster will be England’s number one at some point in the future. Now he has gone one step further by claiming the 26-year-old will oust James as Capello’s first choice before the coming campaign is done.

Sir Alex went on to say that Ben Foster will be England’s goalkeeper in South Africa and he has absolutely no doubts about that. Sir Alex also added that Foster is streets ahead of any other English goalkeeper as he has magnificent abilities and that he is lightning quick, has excellent use of the ball and is exceedingly brave.

Ferguson does concede Foster needs his abysmal luck with injuries to end. However, Sir Alex has confirmed the Leamington Spa-born player, who is set to figure against Hangzhou Greentown in the final match of United’s Far East tour tomorrow night after sitting out yesterday’s victory over FC Seoul, will get enough chances to impress Capello.

Sir Alex also said that he would not want to deny Foster the chance to play in South Africa so he will play a lot of games this season and if he stays fit, he will be number one in South Africa.

Ferguson is effectively confirming he intends to wind down Edwin van der Sar’s career, even though the veteran Dutchman will start his final Old Trafford season as first-choice.