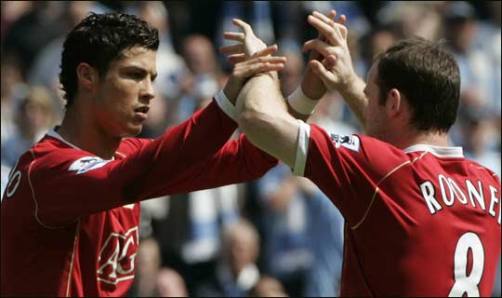 Manchester United manager Sir Alex Ferguson has revealed that he strongly believes Wayne Rooney can cope with the added weight of expectation on his shoulders this season.

Critics have questioned whether the ability of Rooney and whether he can fill the void left by the World Player of the Year, who smashed 84 goals in 196 games for the Red Devils but Sir Alex claims that the 23-year-old will be able to handle the pressure as the club bid to win a record 19th league title.

Sir Alex also revealed that Rooney always wants to do well and play well and that the player has got a real hunger and drive about him. Sir Alex also added that Rooney has got so much energy that sometimes he overdoes it in the sense that he wants to use it all such as dropping into midfield or going outside left.

However, Sir Alex said that Rooney young, and young players tend to be that way sometimes and that they want to spend all their energy on the pitch.

The United manager also said that if Rooney concentrates the way he did at Wigan and spends more time in the central areas rather than the wide positions then he will get goals and there is no doubts about that.

Rooney has so far notched 102 times in 243 games for Manchester United since joining from Everton in 2004.

Sir Alex also went on to say that Sir Bobby’s record is 249 goals, so at this stage of Wayne’s career, Rooney will have to do very well to get anywhere near that.