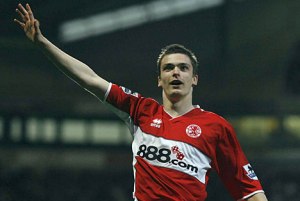 Interesting news is out and it has been reported that Middlesbrough winger Adam Johnson is in the sights of Premier League champions Manchester United.

Local British newspapers have reported that manager Sir Alex Ferguson is well aware reports suggesting much-coveted Johnson could be sold for £6million in the next window are significantly above the player’s real value, given his contract expires next June.

Adam Johnson recently rejected a new contract offer from Middlesbrough and he can now leave the championship side this summer on a Bosman transfer.

It is reported that Johnson is also attracting interest from Tottenham, Everton, Fulham and home-town club Sunderland who have all been monitoring his progress.

However if any of these clubs were to sign him, they would still have to pay some compensation to Middlesbrough because he will be under 24.

The boyhood Old Trafford fan has been monitored by Sir Alex for well over a year and sees the left-sided midfielder, who can also play on the right, as a possible long-term replacement for Ryan Giggs.