Skrtel Out For Two Weeks With Cracked Jaw 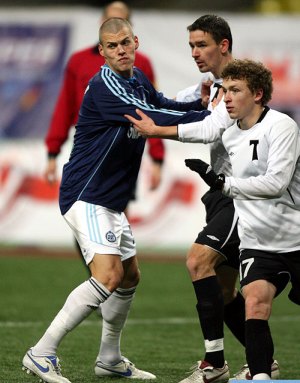 Liverpool will be without centre-back Martin Skrtel for two weeks after his agent confirmed that the player suffered a cracked jaw against Tottenham Hotspur on Sunday.

The Slovakia international clashed heads with team-mate Jamie Carragher early in the 2-1 White Hart Lane defeat and he was clearly in pain but managed to play on until the 75th minute when he was replaced by young Spanish defender Daniel Sanchez Ayala.

It leaves manager Rafael Benitez with a defensive headache for the games at home to Stoke City and Aston Villa as well as the trip to Bolton Wanderers. With no replacement signed for Sami Hyypia and Daniel Agger on the sidelines, Benitez must now find a new partner for Carragher.

When Skrtel does return he will have to wear a protective mask and with options at a premium it could be that Ayala is drafted in to start after he made his Liverpool debut at Spurs. He also started the pre-season friendly against Atletico Madrid.

Karol Csonto, who is the player’s agent revealed that the player’s jaw is not broken, just heavily cracked and according to the doctors, Martin should be back in action within two weeks and he should be wearing a special mask.