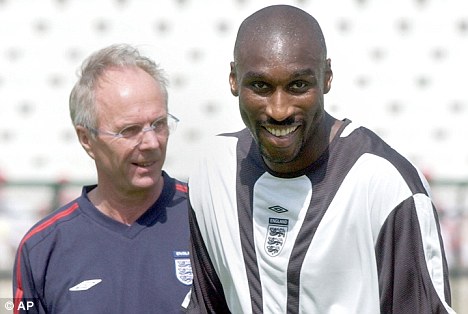 Central defender Sol Campbell has signed a five-year deal with League Two leaders Notts County and the 34-year-old defender has penned a playing contract but will also be expected to fulfill an ambassadorial role with the oldest club in the world.

Campbell, who has 73 international caps for England, will reportedly become the highest paid player outside the Premier League and his arrival at Meadow Lane represents a major coup for the ambitious Midlands club, who were the subject of a takeover by Middle East consortium Munto Finance last month and have aspirations of reaching the Premier League.

The former Tottenham and Arsenal stopper teams up again with former England coach Sven-Goran Eriksson, now director of football at County, after having left Portsmouth at the end of last season and when asked if he had received other offers from Premier League clubs, Campbell said that there were a few offers.

Campbell also said that he is looking at the future and that Notts County are the oldest club in the world and the club has a fantastic heritage and that he wants to be a part of that. However Campbell will have to build up his fitness levels before he can make his debut for the Magpies.

He revealed that he has had three months out but have been training by himself so it is not too bad and that he is definitely not ready to play at the moment but should be ready within two weeks time.

Magpies manager Ian McParland said that Campbell’s record speaks for itself and he’s achieved just about everything in the game as he is a great player and a great organiser and his experience will be invaluable for the club’s push for promotion this season.

He also said that everyone at the club is very happy that Sol has taken on the challenge and are looking forward to getting him settled into the team and seeing him pull on a Notts County shirt as soon as possible.