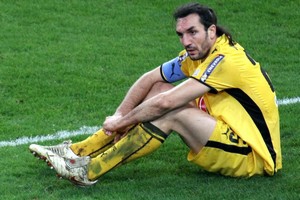 Sensational transfer news are out and it has been reported that Premier League club Liverpool have made a £2million swoop for AEK Athens central defender Sotiris Kyrgiakos.

It is reported that the defender will travel to England in the next couple of days and will sign a three-year contract worth around £30,000 a week.

Kyrgiakos said this is the biggest challenge of his career and that he is sad to be leaving but Liverpool is one of the greatest clubs in Europe so he can’t wait to start.

The 30-year-old played for Rangers for 18 months between 2005-06 and won a Scottish League and League Cup double in his first season at Ibrox.

He has 49 caps and four goals for Greece but missed their Euro 2004 glory through injury.

Rafa Benitez turned to the cut-price Greek after being priced out of a move for £12m-rated Athletic Bilbao ace Fernando Amorebieta.