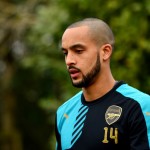 The 27-year-old has not made Arsene Wenger’s starting line-up since their 3-2 defeat to Manchester United at the end of February.

Le Tissier told Sky Sports: “It’s not looking great for him right now and for the sake of his career he needs to be somewhere he’s going to play every week.

“I think he’s in real danger of missing out on the Euros, I really do, and if he wants to be a first-choice striker he needs to be looking at one of the teams outside the Champions League challengers to have that guaranteed. I’d happily have him back at Southampton.

“He’s obviously slipped down the pecking order at Arsenal. Alex Iwobi is now starting and Joel Campbell has also been picked ahead of him, so he’s got to be asking questions.”