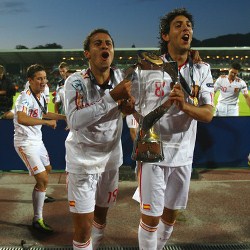 Thiago cracked home a wonder goal in the second period as Spain won the European U21 Championship in Aarhus with an accomplished 2-0 final win over Switzerland.

It is the third time the Spanish have claimed the title in their fifth U21 final.

Having arrived in Denmark as hot favourites for the title, Spain did not disappoint in becoming the first side to score against the Swiss in the two-week tournament.

Spain were deserving winners of the trophy and were never under any danger after Ander Herrera rose to nod home a superb cross from Didac on 41 minutes before a crowd of over 16,000 in Aarhus.

Thiago – son of Brazil’s 1994 World Cup winner Mazinho – added the killer second goal on 81 minutes when he lifted a free-kick over Yann Sommer from over 40 yards out having spotted the Swiss keeper straying off his line.

It put the seal on a fine victory for Spain, who continue their country’s recent dominance in international climes with the senior side already European and world champions.

Adrian failed to add to his haul of five goals in the competition, but wins the Golden Boot award as the tournament’s top goalscorer.